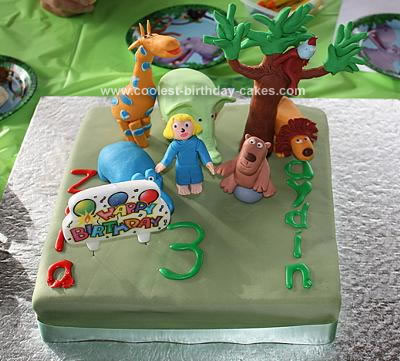 This year, we decided to have a “64 Zoo Lane” birthday theme. A and Z really love Lucy and all the animals on the C Beebies channel. Unfortunately, one can not easily find 64-themed party ware in Botswana (or anywhere else for that matter!) and we decided to go with a plain green re-usable plastic table cloth and animal themed plates, cups and serviettes. My Mum, who visits us from Cape Town from time to time, brought the party-ware and stacks of other goodies from Cape Town.

I didn’t have time to do animal faces on the cupcakes, which I wasn’t too sorry about, because I have discovered that toddlers this age are really just interested in the icing anyway! I also made some animal shaped biscuits with cutters my cousin bought for me in Cape Town. Another cousin bought some flat packed suitcase goody boxes in pretty colours which we used as goody bags. I managed to find some 12cmX12cm stencils of various animals and packaged 3 stencils together with 3 khoki/felt-tipped markers in different colours for each child.

The goody bag was also filled with a pack of peanuts and raisins, Fruit sticks, a lollipop and a Chomp wafer chocolate. I was conscious of the fact that many parents dread goody bags because they are always filled with so many sweets which the children often insist on having all at one go, so I decided to fill the bags with healthy treats…. the lollipop and the Chomp being the exception!

The homemade 64 Zoo Lane birthday cake! Well…. the toppers were of course the most time-consuming part of this exercise! It was my second attempt at sugar paste toppers. Last year I made an “In the Night Garden cake” and quite enjoyed making all the little characters. Nelson the elephant and Henrietta the Hippo were definitely the easiest, followed by Lucy and Boris the Bear. Reginald was a little more difficult and Georgina gave me hell! Zed the Zebra didn’t even make it onto this cake because one of his forelegs broke on the morning of the party and I just could not be bothered!

All in all, I have discovered that timing is everything and if you allow a body part to dry too much, it will be really difficult to attach it later on. My mum helped me, at 12:00 midnight (the night before the party) to tint, roll and lift the sugar paste over the cake… what a drama that was!

All the effort was worth it though when my little Zara said to me the next morning: “You are such a clever mommy!”. I’ve also discovered that the only thing that matters is your child’s/rens’ ability to recognize the character you are making. If you get the right answer, you know you’ve hit the jackpot! I am now making Dora, Boots and Swiper for a little cousin of mine, and once again I will be relying on the expert opinions of my little ones!