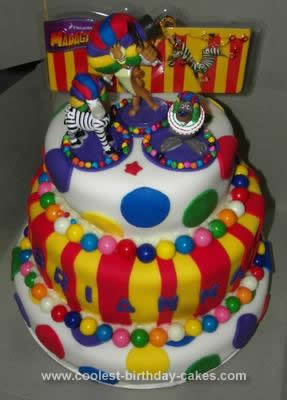 This Afro Circus Polka Dot birthday cake was created for my co-worker’s daughter, Brianna, to celebrate her sixth birthday! If you’ve seen Madagascar 3 (or know a child who has) you’ve probably been treated to numerous renditions of the Afro Circus Polka Dot theme song. That’s my inspiration for this cake.

The three featured characters – Alex, Marty, and Stephano are sporting fondant afros as they perform in their three-ring circus on the top layer. The top and bottom layer are covered in white fondant decorated with polka dots colored to match the multi-colored afros. The middle layer is yellow fondant with red stripes to echo the circus curtain from the three-ring display.

The layers are ringed with gum balls. Bri, herself, asked me not to put any fruit in her cake, so the cake is fairly basic: yellow cake with vanilla custard filling. There is a crumb-coat of vanilla butter cream beneath the fondant. I had searched the internet for a cake based on this theme while looking for ideas and found none! I can’t imagine there aren’t a few more boys and girls out there who would love a Madagascar 3 cake as much as Brianna!

I had a great time putting this all together and the payoff was the big hug and the smile on her face. Hope this gives someone else an idea of how to approach the latest adventure from Madagascar in cake!