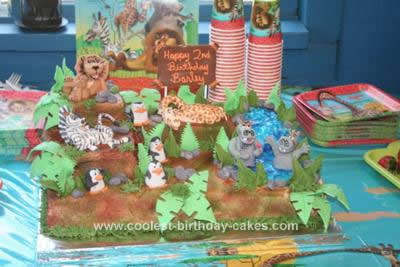 This Madagascar 2nd Birthday Cake was made for my granddaughter’s 2nd birthday. She had watched the movie Madagascar, a million times if not more, over and over and over again. She was just in love with the movie, so her mother thought it would be a good idea to have a cake made after the movie, with all her favorite characters on it.

So because I’m such a nice grandma, I said, ” Well let me see what I can do, but I’m not making any promises.” So about a month before the party I started to make the animals, wow what a job that was. First I made Marty (the zebra). I used fondant for all the characters. I diluted food coloring with vodka so I could paint the stripes on Marty. I was having so much fun. Then a few days later I made another character and then another until I had them all done. Then I needed to figure out just how I wanted to put the characters on the cake and the scenery.

Humm, let me think, well Moto Moto and Gloria (the hippos) had to be in water of course. The rest I decided would just be lazily laying around on the cake and then I put some jungle bushes and then I airbrushed it to look camouflaged. Of course the king of the jungle Alex (lion) had to be at the top of the cake. I placed the penguins here and there. Her mother had bought all the paper products to make her Madagascar theme party, the table looked so nice.

The kids loved plucking the animals off from the cake and biting the heads off. They thought that was so cool. After the cake was passed around and eaten I gave my granddaughter her birthday card which played the theme song from the movie. My granddaughter put the card on the floor and proceeded to sing and dance along with the card. It was the highlight of the party to watch her.