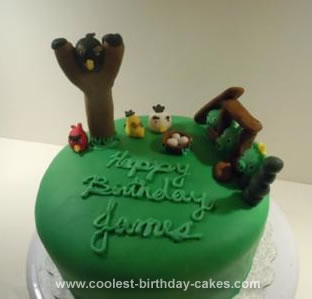 My mother-in-law and I made this Angry Birds cake for a friend’s birthday. This is a standard marble cake with butter cream icing. The fondant is just regular marshmallow fondant. We make our own fondant except for the black, brown, and red fondant. Those we purchased from the craft store. It is so hard to get the black and red dark enough!

For the slingshot I started with a big rectangle of brown fondant mixed with white to give it the wood effect. I then added the “U” and worked the pieces together. I cut a skewer to size and ran it through the slingshot and into the cake for support. The skewer is my only non-edible element. I also used dry spaghetti to reenforce the “U” of the slingshot.

For the birds and pigs I printed a picture off the internet and used it as a reference. One batch of marshmallow fondant was more than enough to pull bits off of to dye the colors needed for each bird. We used the Wilton skin colors pack for the brown and black and a little tub of red that came from Duff. The pigs were simple but the birds were a little tougher. I recommend rolling a bunch of little white eyeballs before starting. They tend to work better when hardened a bit. Then I take a tiny little dot of the black and use this little Wilton tool to push it onto the white after I’ve placed the eyeballs in.

Most of the time the pieces for the face will stick directly onto the character I’m making but occasionally I’ll use pure vanilla or a touch of frosting as “glue”. The eyebrows on my birds had to be “glued” on. I used the dry spaghetti noodles to place all the pieces and hold the piggies blocks and rocks in place. It is great because it can be broken into any size and is fairly sturdy for reenforcing smaller things.

The cake got a great reaction. Everyone really enjoyed it. Especially the birthday boy and his son. 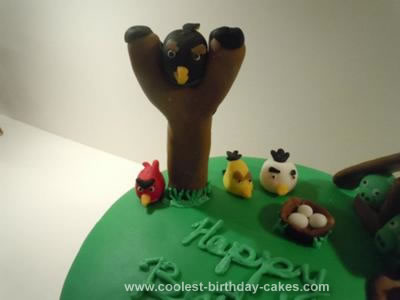 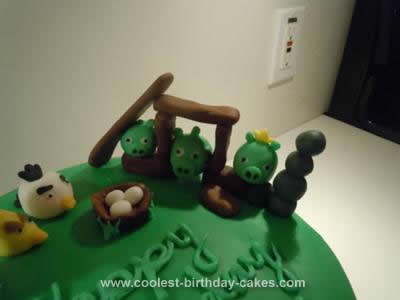