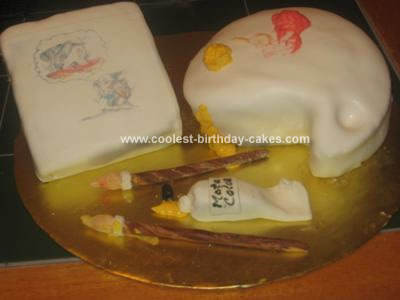 My brother is going to art school and so when his birthday came around I knew I had to use some of his art for an art cake. I bake four eight inch round cakes. Two were for the paint palette and one was for the art piece. The fourth one was to be used to prompt the cakes.

For the paint palette a circle was traced around the cake pan and then cut out in the form of a palette. The paper was then put on top of the two layers of the frozen cake and cut out. On the top layer I made a small hole where the painters fingers would go. I then put about a third of the fourth cake under the layered cake cut at an angle, so the palette would stand at a slight angle.

The cake was then covered with white fondant. I started to put buttercream frosting as the paint and then I decided to put melted colored chocolate instead.

For the art piece I cut the round cake into a square and covered it with a little bit of buttercream frosting and then put on the white fondant. I had a picture of his art put on edible image so that I could put it on the cake. With some of the fourth piece of cake I layered it as a small square and then cut it at an angle and then covered it with brown fondant. This way the art piece looked like it was laying against a block of wood holding it up

To finish it of I had made the paintbrushes a few days ahead out of fondant. When this was all done I decided it was missing something so I got a little piece of cake and did a crumb topping and covered it with fondant to make a tube of paint. Since there was a tube of paint a cap needed to be made for it, so a cap was made out of black fondant.

This cake was so fun to make and everyone loved it.