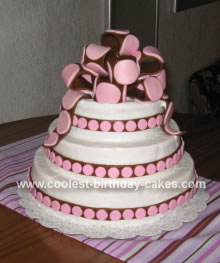 The ribbons and bow are made from fondant. I made my own marshmallow fondant and rolled out the brown strips about 4 days ahead of time. They take a long time to dry. I have learned since then that you can add a little bit of gum tex (made by Wilton) to your fondant and that will speed up drying time. I also rolled out the pink and made the circles the same day and assembled the bow loops.

To make the bow use 14, 1in. by 6 in. strips, and attach the ends together by pressing them to form loops. Then lay them on their sides on top of a piece of wax paper to dry. Cut two more strips for the ends of the bow to hand down. I dried mine on an upside down bowl with the ends touching the counter and the tips curled up against a butter knife. But it probably would have been easier to bend it into position and lay it on it’s side to dry like I did with the loops.

The day before the party I assembled the bow, by gluing the loops together with brown buttercream. I placed a glob of frosting on a piece of wax paper and then assembled the loops with their ends inside the frosting, adding more frosting in places that needed some extra support. Then let that sit and dry.

The day of the party I baked and frosted the cakes, then rolled out the brown strips for around each layer. Once they were attached to the cake I wet the brown fondant with my finger and attached the pink circles. I poked five skewers into the top 6 in. cake reaching down to the cake board to stabilize the cake layers, and to support the weight of the bow. Then I picked up the dried bow and carefully peeled the wax paper off the bottom. Placed a glob of frosting on top of the 6 in. layer and then set the handing down ribbons and the bow in the wet frosting.

I then let the cake sit for a while to dry and stiffen up before I moved it. Everyone at the party was amazed and loved the cake.