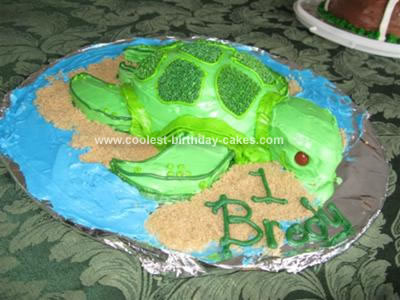 This Baby Turtle Cake was made from one box of cake mix! It was a small turtle cake for a 1 year old, so we had another sheet cake at the party to be able to feed everyone.

I baked 2 small round cakes, one using a deep pan and one using a regular pan. The deep pan was the shell, and I used a knife to carve off the sides to make the shell appear more round. The smaller shallow pan cake I cut out the shape of the head and attacked it to the shell with icing. The fins were also carved out of the smaller cake and I cut the wedges of fin in half, so that each had a mirror image of the other fin.

I laid everything on a cake board wrapped in foil and iced everything with a can of Betty Crocker white icing dyed green (I think this icing is not as greasy as homemade buttercream so I use it, and to make it creamier and not as stiff I take the icing out of the can, add 2 tbsps milk and whip it up with a mixer). To get variations in color I added yellow to make parts of the turtle lighter, and then I added blue to make the patches on the back.

M&M’s were used for the eyes and the look was completed with blue wave icing and brown sugar “sand”. Decorater tips and piping bags were used to create outlines, and shell design.