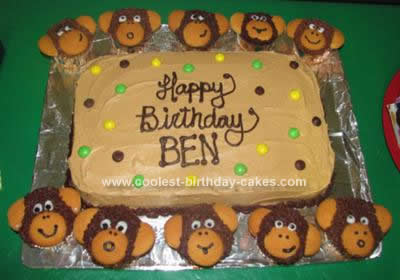 I made these Banana Monkey Face Cupcakes and cake for my son’s 3rd birthday. We had his party at an indoor playground called The Monkey Room in New Orleans so of course, “monkeys” were a fitting theme. I initially wanted to do a banana cake because monkeys eat bananas. Then I got the idea for cupcakes that look like monkeys by doing some web searches. I love the monkeys with expressions on their faces as they remind me of my adorable and animated son who has his own multitude of facial expressions!!

So, I started with this delicious banana cake recipe. And then decided that a delicious complimentary icing would be peanut butter flavored. So I tried out the combination a few weeks before the party and it was delicious! This icing is so fluffy, creamy, and delicious. It reminds me of fudge but not as rich. It is perfect!

I decided to dye the peanut butter icing brown so it would look more like a monkey. I think a chocolate icing would also taste great with the banana cake, or any cake for that matter. I got Wilton brown food coloring from Michael’s craft store. They have lots of great cake decorating tools. We used a star tip (#16) for the “monkey fur”. We used a full Nilla brand vanilla wafer for the monkey’s muzzle, and cut them in half for the ears. I think the mini Nilla wafers would also work great for the ears. We found it looked a little better to add more “monkey fur” icing to the inner ear area after putting the ears in place.

The faces were simply drawn on using black and white icing with a #3 tip. For the black, I dyed store-bought chocolate icing with black food coloring. And I bought a tube of the store-bought white icing and used the #3 tip. You could probably use a bigger round tip for the white of the eyes, but you definitely want to use a small tip for the nostrils and mouth. It was fun coming up with different faces for all the monkeys. I even put some white “pearl” earrings on one of them!! I was going to put pink bows on some of them but it was late at night and didn’t have the energy to dye more icing.

The large cake part was baked in a 13×9 glass pan. It is also banana cake with peanut butter icing. We dyed cream cheese frosting green and yellow and used a large round tip to make the polka dots on top the cake and as the border. I believe I used a #3 tip for the writing. That’s the first time I had written on a cake in a very long time so I was a bit shaky. We had great plans to draw bananas and banana leaves on the cake but we chickened out at the last minute as it was very late and could not come up with a great design.

I love the way the cupcakes came out and had fun making them with my niece and mother-in-law. And my 3-year-old loved sharing the monkeys with his friends and having special homemade monkey cakes for his birthday!!!

On another note, if you are having a monkey-themed party, a great healthy snack to serve is a jungle or Rainforest trail mix with banana chips, dried pineapple, coconut shreds, raisins, and peanuts. Whole Foods has a similar mix without the peanuts. 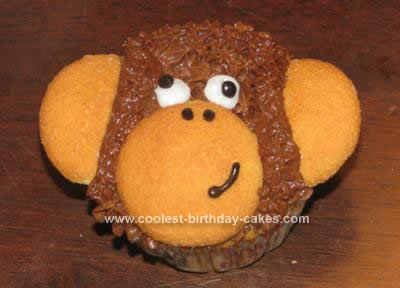 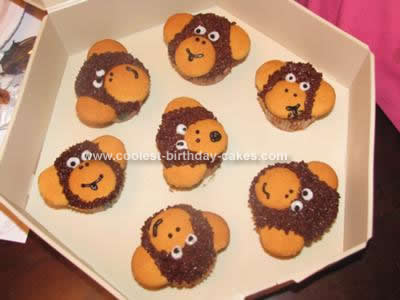