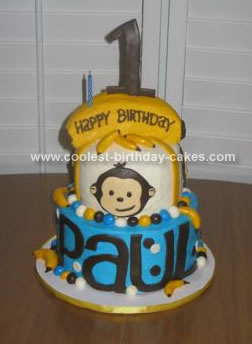 I made this Mod Monkey cake for my son’s 1st birthday. It consists of a 3-layer 8 inch cake and a 3-layer 6 inch cake. His party was at lunchtime on a Saturday, so I baked the cakes (chocolate) on Thursday afternoon, leveled them, put the layers together with buttercream and then crumb-coated them. I put some of the scraps I had leftover from leveling into the freezer and after they were frozen cut them into the shape of a banana to go on top (I used the banana as his smash cake). I crumb coated the banana as well and put it back into the freezer to help it hold together. I also made a lot of my decorations on Thursday. I had prepared 5 different colors of marshmallow fondant on Tuesday (white, chocolate brown, tan, sky blue and bright yellow). I printed templates for my letters, the big number 1, and also for the monkeys’ faces from my computer. I cut the letters/number out of chocolate brown and used chocolate brown and tan to make the monkeys (I made 3 different faces to go around the cake). Finally I used yellow to make a few mini bananas and added dark brown at the ends. I let the decorations sit out on my counter overnight so they could stiffen up some.

On Friday I put the outer coating of frosting on (white on the 6-inch and sky blue on the 8-inch and bright yellow on the banana). After letting it set up, I smoothed it out and got it ready for the decorations. I put 3 wooden dowels down into the 8-inch to add support and then positioned the 6-inch layer on top. Then I added the “banana” on top of that. Next I started adding the decorations- first the letters around the bottom layer and the number 1 on top of the banana. I cut 3 strips of yellow and evenly spaced them on the white layer, and then added the monkey faces in-between. I added brown and white polka dots to the blue layer. I used the rest of my fondant to make small balls and put them around the layers as a border, interspersed with the mini bananas. The last thing I did was make a little bit of chocolate buttercream (just added cocoa powder to my white buttercream) and put some on the ends of the big banana and also piped Happy Birthday on the front of the big banana. When my little guy saw it in the morning he giggled and giggled at the monkeys.

He had a lot of fun smashing his banana all up that afternoon!