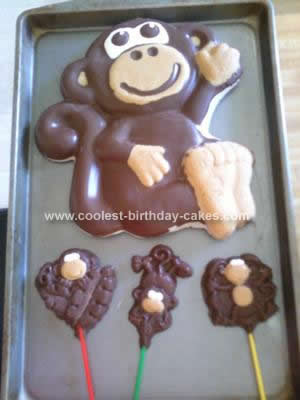 This is a Monkey Birthday Cake Design. I started with a monkey shaped cake pan that can be purchased at any craft supply store or where ever they sell shaped cake pans. I melted different chocolates and layed it in the pan to get the top piece that went on top of the actual cake. Note: when making the chocolate overlay make it as thin as possible or it will be impossible to cut through and u will have to remove the chocolate to cut. Once you have your final layer of chocolate in the pan refrigerate at least 4 hours. I let it sit overnight. Then pop it out and keep in fridge on a piece of wax paper. Don’t worry if it happens to break a little you will be able to fix it when u put it on the cake.

Wash the pan and then bake the cake according to the directions on the pan and the cake mix you buy from the store. I used funfetti cake mix for this cake as well as the cupcakes that i will talk about later on. Once the cake is baked let it cool for at least 30-45 so that when you go to flip it out the entire cake stays together. Next “dirty ice” the entire thing and do not worry about covering up the lines just make sure it is a nice even layer. I make my own butter cream icing that I can tint to any color I need. The recipe can be found at allrecipes.com under butter cream icing. Once its iced and you let it chill for about 15 min. Take the chocolate overlay of the monkey and lay it exactly over the cake and softly push it down to make sure it “adheres” to the top of the cake. Then take more of your icing and go all the way around the cake to cover up any places it doesn’t line up just right to. (other variation is to make the chocolate monkey overlay and make a rectangle cake that will have the overlay centered on and then decorate how you want.) Once that part was done I kept it chilled until I delivered it to the party. I also bought too much chocolate and it was my 1st time working with melting chocolate so I found a monkey lollipop mold and used the extra chocolate to make candy pops for all the goodie boxes that went home with the kids. Once the pops were set I used sandwich bags that are just those fold over ones not the zip lock and tied it with a bow to match the party theme and they were very pretty. (Big hit and it made a nice surprise for the kids to have something special other than some just plain old store bought candy)

Then I made 4 dozen cupcakes(it was a very large birthday party for a one yr old so we needed a lot of extra cake) and tinted my icing either brown or green to create the “banana tree” that was layed out next to the monkey cake. for the brown cupcakes that were to look like the bark of the tree I took some leftover white chocolate and added some brown food coloring and it made the chocolate very crumbly and then dipped the cupcakes in it to give them texture. You can also use crushed graham crackers for the texture.

Next I made some fondant to use as decoration. The recipe can be found again at allrecipes.com under butter cream fondant. I have always hated fondant but since I found this recipe it is a very easy recipe to make and work with. I tinted it to my banana yellow and made a bunch of different sized bananas to go on top of the extra cupcakes that were not used as part of the “tree” and to also be layed out around the whole cake setup.

Finally, I made a “smash cake” for the birthday boy which was simply a 13×9 sheet cake that I cut in half, stacked, and carved into the shape of a banana then tinted the icing to a banana yellow iced it and took a small spatula and kinda scraped a little brown icing to give the banana a more textured/realistic look. Chill and done!

Also shown in the picture are many different embellishments such as a bobble head monkey, foam cutout monkeys and trees, as well as the candy pops. All of these were very cheap items that I found at A.C. Moores or the dollar store to just dress up the table and make it more complete. 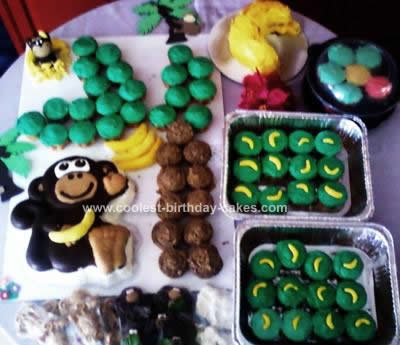 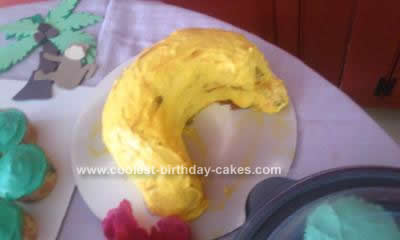 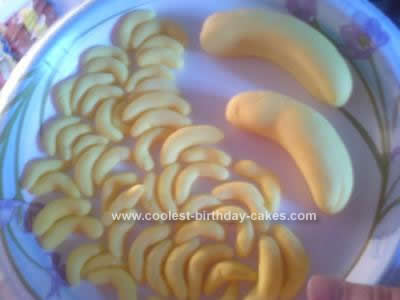