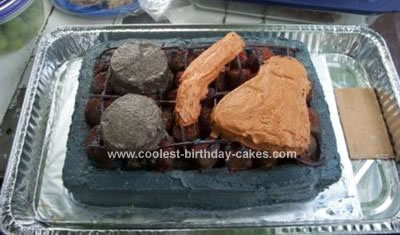 I made this homemade Barbeque cake for our Father’s Day picnic.

The pit is made from two 9×13 cakes. The first one is trimmed to have a flat top and placed on the cake tray. The second is hollowed out slightly to allow depth for the coals, and placed on top of the first one.

I used chocolate covered marshmallows for the coals. ** I used large ones but small marshmallows would probably have worked better **. Ice the BBQ pit (9×13 cakes) a dark grey or black, completely. Once you are finished icing, bring your melted chocolate and marshmallows next to your cake. Coat the marshmallows and place them in the pit, making sure to position each one differently so it doesn’t look uniform.

Fill the pit with marshmallow coals and to add ‘heat’ to the coals sprinkle them with red sugar sprinkles while the chocolate is still melted. ** You have to place a few marshmallows at a time then add heat so the chocolate doesn’t harden **.

The grill is made from shoestring licorice, but foil covered skewers would also work. And the food was shaped from the left over cake I had from hollowing out the second 9×13, and iced to colours of steak, hamburgers and hot-dogs.

TIP: ** Be careful when placing the ‘food’ on top of the grill. I got comments about where I placed my hot-dog next to the burgers… **