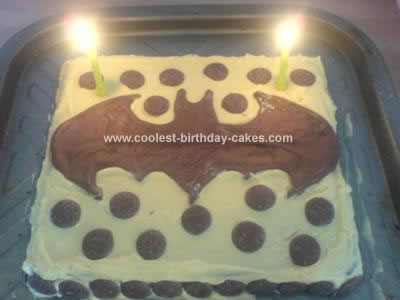 For my dad’s birthday I was giving him the new Batman film on DVD and a Batman card, so I decided to carry on the theme and give him a Batman cake. I like to homemake my family’s cakes as they taste so much better, but I was unsure of how to make Batman. I came on this site and saw the Batman symbols cakes, and realized it would actually be very simple to make.

Many of the people on here used frozen buttercream transfers, but my dad is not fond of icing as it is too sweet. Therefore, I decided to make a chocolate transfer so there would be less icing on the cake!

I started by melting a bar of his favourite galaxy chocolate. Cooking chocolate would probably be easier to work with but doesn’t have the same great taste. I then poured the melted chocolate into a piping bag and drew the Batman symbol freehand onto some greaseproof paper. It went a little wobbly but still looked OK! I then filled in the middle with the piping bag and smoothed with a spoon so there were no air bubbles. I put it into the freezer and made a chocolate sponge cake.

I then iced the cake with some homemade buttercream, tinted yellow like the Batman symbol. I covered the cake and while the icing was still wet, I took the symbol from the freezer and flipped onto the cake like you would with a buttercream transfer. When I peeled away the paper, the chocolate symbol stayed on the icing! I decorated the empty spaces with chocolate buttons, and made a border round the edge with them. I added candles and voila!

My dad loved it, and was glad I’d made it with chocolate rather than icing!