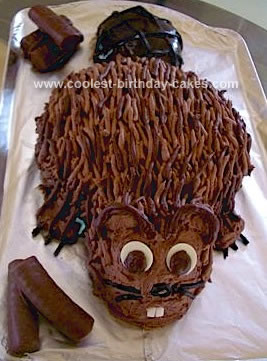 My father-in-law, always kept busy, was nicknamed The Beaver, as he would always be found beavering away in his home, office or the garden. For what ended up being his last birthday (his 77th) before passing away from cancer less than six months later, the whole family got together for a small party and an over the top cake seemed in order.

I made all the Beaver Birthday Cake ‘from scratch’ with red velvet for the body (a single high rise 8 inch round), and a rich chocolate for the head, tail and claws (two 8 inch sandwich round tins). I think it was a Martha Stewart recipe for the red velvet and I can’t remember for the chocolate cake. The body needed no carving, the tail was a freehand cut out and the head was two pieces sandwiched together with frosting and also cut by freehand. I was really winging it on the design!

I made a butter frosting with cocoa, splitting the mix and adding in melted chocolate for the darker frosting. I used milk and white chocolate buttons for the eyes and ears (which were covered with frosting) and black licorice for the decorations for the head and claws. The fur was made using a wide round piping tip.

For the tail, I made more a chocolate glaze (melted dark chocolate and cream, with some icing sugar) and used licorice again for the tail detail. The log decorations are chocolate covered marshmallows.

The surprise went down a treat with none of the adults or children knowing what was coming except for my husband and I. There were shrieks and laughter when everyone realized what the brown thing was coming to the table!

When the cake was cut, the red velvet for the beaver guts garnered a second round of awe and cheers! Plus it was actually very moist and tasty.

A great memory made from a few hours of baking. Best cake ever. 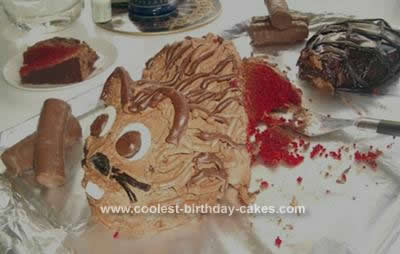 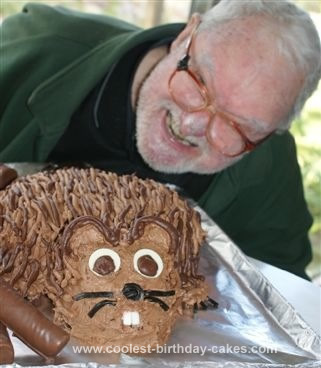