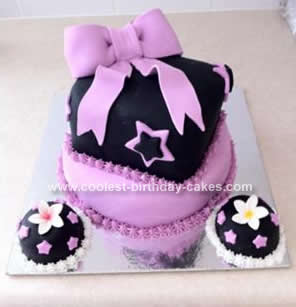 My Big Bow Cake was made for my sister for her birthday, it consists of 2 layers and a lot of time on my behalf since I have really only just started this cake making skill. The bottom layer is a 22” round milk chocolate cake with a chocolate buttercream then covered in a purple marbled fondant, then the second layer is a 20” square white chocolate cake with a vanilla butter cream. As for the bow my sister is quite girly and thought that it would look quite nice and make it look almost like a present on top of the purple cake.

In front are two vanilla cupcakes that are completely covered and then purple stars to decorate with some fondant flowers on top. Around the outside of each layer is royal icing that has been peaked to help cover the messy bottoms of each layer. The bow entails making all parts separately then brining them all together under the middle part of the bow and forming it together. After many attempts I found it better to make the bow and sit it on the cake to dry instead of trying to make it before. At the same time a box was used to hold the cake up on the edge so it wouldn’t fall off while drying.