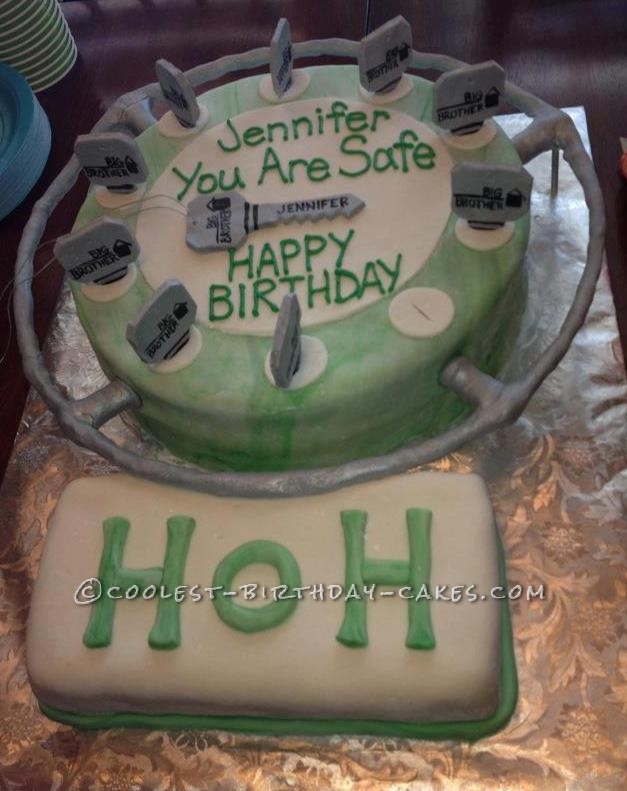 This was made for a friend’s girlfriend, who is a really big fan of the show, “Big Brother.” About 5 days ahead, I made some gumpaste, tinted gray with a small amount of black color. Using a template, I made 15 keys (5 extras, just in case!) and poked a hole in one for the birthday girl. I let them dry overnight, and the next day I sprayed them with silver color mist. I let that dry for a couple of days and then handpainted the lettering on each key. I had a plywood board cut at Home Depot so it would withstand the weight of the cake, and I covered it in silver cake foil. I started by making 2 12″ round chocolate cakes and then layered them with chocolate buttercream. The cake was iced with chocolate buttercream and then covered with some homemade marshmallow fondant. The fondant was incompletely mixed with some kelly green color to give it a marble effect. I then cut a 9″ circle of white fondant for the center and used my medium sized fondant circle cutter for the key holes. For the outer rim, I found a wire wreath base at the local hobby store. I wrapped some wire around the sides to stick into the cake and then covered the whole thing in fondant tinted gray with a small amount of black color. I then coated it with silver luster dust. I ended up having to put some supports under the rim so it wouldn’t tear through the cake. The “head of household” cake was made with one 9″x13″ cake cut in half and layered with vanilla buttercream filling. It was iced in vanilla buttercream and covered with the white homemade fondant. The letters were shaped using the marbelized green fondant. This was also used for the border. The lettering on the round cake was piped with vanilla buttercream tinted with kelly green. Lastly I stuck the keys in the cake, except the one for the birthday girl. I put a string in that one so she could wear it for the party!