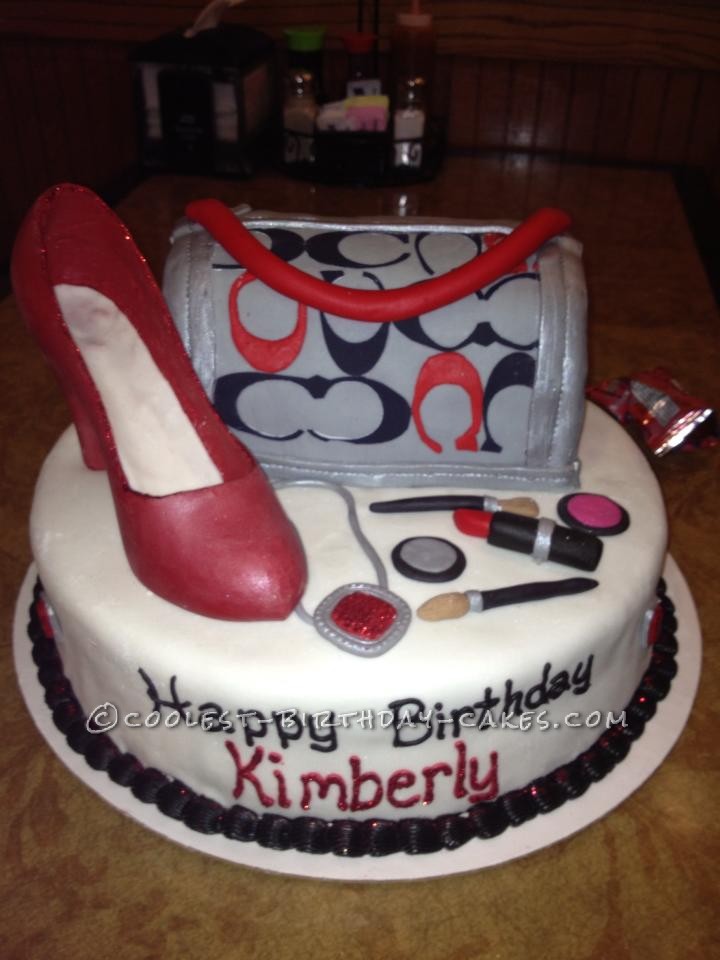 I first baked two 12″ round chocolate cakes for this purse cake. I put a paper thin coat of chocolate butter cream icing on each cake because  my friend wanted raspberry jam filling, and I find the filling can sometimes makes the cake a little soggy when it’s made a few days in advance. I put some plastic dowels where the purse would sit, then put a coat of chocolate butter cream icing on the outside and covered the cake in white homemade fondant.

For the purse, I made 2 batches of vanilla cake to make one 9″x13″ cake so it would be thick enough. I cut it into thirds and layered it with white icing and raspberry filling. After stacking them, the cake was too long, so I cut about 2″ off the side, making it about 7″ long. I stuck it in the freezer overnight and carved the top to make it more rounded. I iced it with white icing and covered it in homemade fondant, tinted gray with a very small amount of Wilton Black. I stuck 2 wooden dowels through the purse into the round cake to hold it in place.

For the coach “C’s”, a local supply store was able to print off edible images of the black ones, but I had to hand cut the red ones. After applying those, I made some strips of the gray fondant to go around the purse. I put the stitching on those and painted them silver with luster dust. The red handle was simply rolled from fondant. I sculpted the makeup from fondant, and used the Wilton jewelry impression mat to make the necklace with gray and red fondant. I used silver luster dust on the gray and red disco dust on the red part for the sparkle.

To make the shoe, I used a shoe candy mold with red candy melts. I used an exacto knife to trim the edges. I put a coat of red pearl dust on the shoe because, even though I used gloves, the original finish still smudged. I cut a liner out of white fondant and put red disco dust around the edge of the shoe opening. I then piped a butter cream shell border (chocolate icing tinted black) around the bottom. I made some more jewels, made in black, white and red colors, with the impression mat and placed them all around the cake. I then piped the lettering in black and red and added red disco dust to her name.