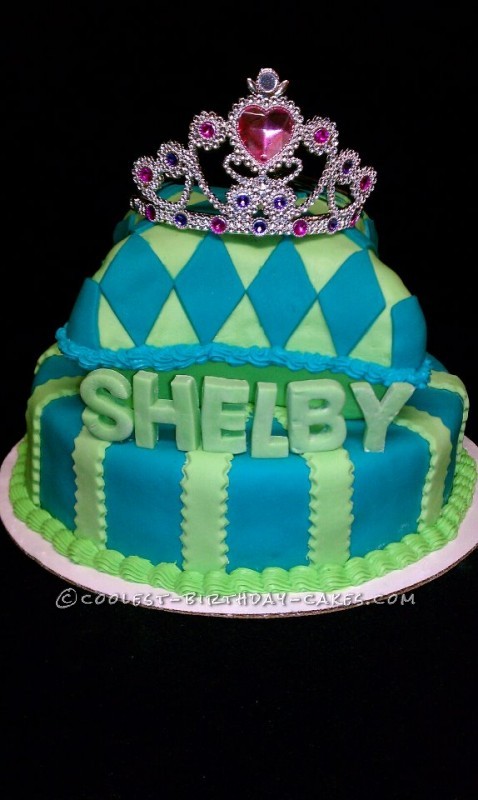 This cake was made for my little cousin’s best friend’s 16th birthday. She has participated in several pageants since she was little. I started by making gumpaste about 3 days ahead. I tinted it with a little leaf green and cut out her name using some alphabet cookie cutters. I stuck toothpicks in the bottom of each letter and let them dry. The bottom was 2 10″ round cakes with chocolate buttercream filling. I then iced the outside in chocolate buttercream and covered it in homemade fondant, tinted with sky blue. I then tinted some fondant with leaf green and cut strips using my fondant cutter with the wavy wheel attachment. The border along the bottom was vanilla buttercream tinted with leaf green and piped with tip #32. The top tier was 2 vanilla cakes baked in the small pillow pan. They had vanilla buttercream filling. I then iced one side with vanilla buttercream and covered it in fondant tinted with leaf green. This was more difficult than I had thought it would be. Then I flipped it over and did the same with the other side. I used a diamond cookie cutter to cut out the pattern for the top, using the fondant tinted with sky blue. I then used tip #32 to pipe the sky blue vanilla buttercream border on the seam of the pillow. That wasn’t too easy either! I then stuck the letters on the cake and lastly put the store-bought tiara on top. She loved it and wore the tiara for the whole party!