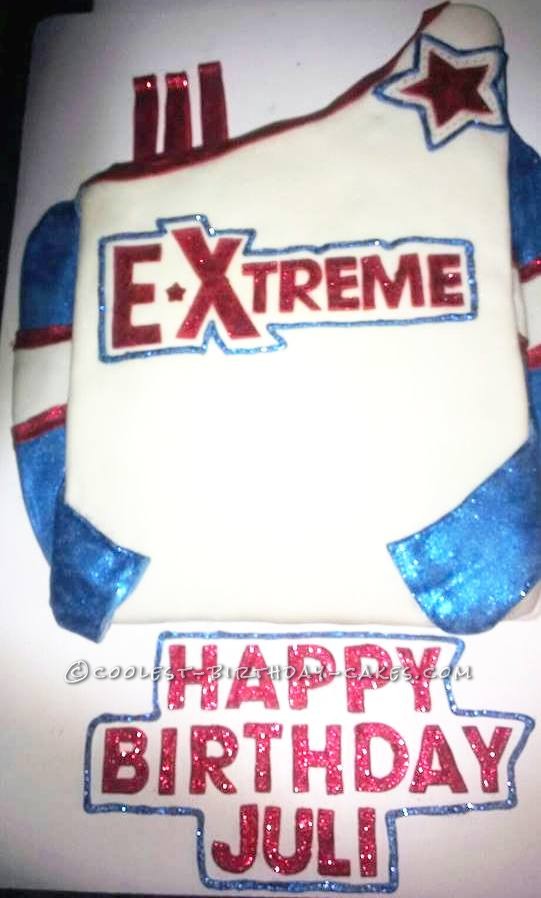 This Cheerleading birthday cake was made to duplicate a little girl’s cheerleading top. I made two 12″x18″ cakes that were half chocolate, half vanilla. I layered them with butter cream filling (chocolate on chocolate, vanilla on vanilla). I then cut out one of the shoulders. I coated the cake in vanilla butter cream and covered it in white homemade marshmallow fondant. I tinted some fondant with no taste red and some with sky blue.

I first made the sleeves, starting with the blue fondant. Then I cut some red strips and a larger white strip for the detail on each sleeve. I attached them to the sides and covered them in red and blue disco dusts. Then I cut some red strips to make the lining on the top and the shoulder straps. Once those were attached, I coated them with red disco dust. Then I worked on the lettering.

The smaller letters were cut out using alphabet cookie cutters. The larger “E” and “X” were cut by hand. The stars were both cut with star shaped fondant cutters-one small, one large. I got those placed and then covered them in red disco dust. The “Extreme” and the larger star on the shoulder were outlined with vanilla butter cream tinted sky blue and dusted with blue disco dust. I used some silver sugar sprinkles between the large star and its outline. I then used the alphabet cookie cutters to cut out the lettering on the board out of red fondant. It was also coated in red disco dust. I outlined it with the sky blue butter cream and gave that a dust of blue disco dust.