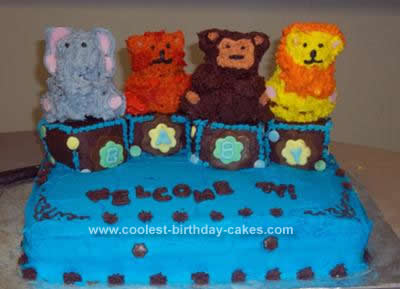 I have always made birthday cakes for my kids and one baby shower cake for a friend, so making this Homemade Blocks Animals Baby Shower Cake for the entire faculty at the middle school I teach at was a big step for me. I made this cake for another teacher. I choose the colors for the cake because it matched with the decorations purchased by the other teachers. I got the idea for the cake by combining parts of cakes I liked from the Wilton book.

The night before I made the blocks and animals for the cake out of the pound cake recipe on the Wilton website, which was easy beside you just modify a cake box. I also made the letters and ears, feet, dots and flowers out of the pre-made fondant from Wilton. I used a 6×2 inch square pan for the blocks and the mini-bear pan for the animals. I had to cut and stack the cake for the blocks which was difficult to get even. I am going to try to find a cake pan that is more of a cube next time.

The next day I made two 11×14 white cakes and layered them for the rectangular base of the cake. I then frosted the entire cake and decorated it by using the #16 star tip from Wilton for the brown stars and used a stencil for the edges. I just used a basic buttercream recipe. Next, I frosted the blocks with chocolate frosting and put the fondant decorations on the blocks.

Next were the animals. I cut off the ears on all of the bear cakes and did some carving on the cakes to suit each animal. I used the star tip to decorate the bodies on the animals and placed the fondant ears/feet on the cake. Make sure that the animals are even on the bottom or they might tip over. Finally I put the animals on the cake.

This cake was a little time consuming, but I had fun doing it. 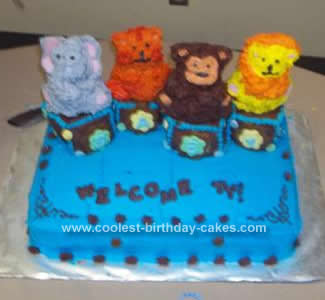