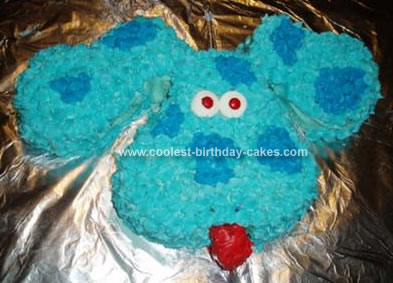 For my daughter’s 2nd birthday my mother in law and I made her a Blues Clues cake. It was a lot easier than I thought it was gonna be and didn’t take too long either. I searched the internet for ideas. I ended up using some suggestions from this website. I printed out a template of Blues head from the Nick Jr website.

I baked the cakes a head of time using 2 10 inch round cake pans. I then froze them. The day before the party I took the cakes out of the freezer as I was about to start the cake. It was a little hard to cut them, I should have taken them out maybe a half hour or so before. I cut out the template and placed it on the middle of one cake and cut the head out with a sharp knife.

Then I placed the ears on the other cake and cut them out. I also cut out a small piece of left over cake for his tongue. I used food coloring to make blue frosting and frosted the cake. Then I used teal food coloring for Blues’ spots.

I used marshmallows for his eyes and I wanted to use Junior Mints for his eye balls but forgot to buy them, the only thing I had was red M&Ms. Finally my mother in law star tipped the cake. It came out great and my daughter and guests loved it!