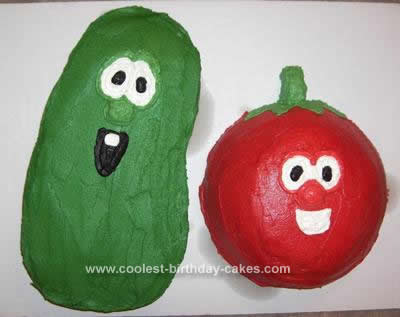 My daughter loves Bob and Larry, so it was an easy choice for her 2nd birthday party cake. I read a lot of ideas on this website and combined different tips from different people to make my own Bob and Larry Birthday Cake.

Larry was baked in a 9×13 cake pan. I actually printed off some outline drawings of Larry that I found online, and then traced out a template on parchment paper, laid it on the cake and then trimmed off the sides to give him the right shape. Bob was baked in a dome pan. I flattened off the very top of the dome where his face went to make it a little easier to draw the face on it.

For the frosting, I used Wilton’s buttercream frosting recipe. For Larry, I used a mixture of Kelly green, leaf green, and a little black to make the final color, and for Bob I used red-red and no-taste red. I frosted both of them and let it harden in the refrigerator, and then I used a paper towel to gently smooth out the spatula strokes the best I could. I saved out some of the frosting before I got the final color done to add on later for the edges around the eyes, noses, and Bob’s stem. I put those on with a decorating bag and small round tip.

I used canned white frosting for the eyes and teeth, and a little chocolate with black coloring for the mouth and eyes. I used decorating bags and a large round tip for those. Bob’s stem is a leftover piece of cake from Larry and covered in frosting. I thought they turned out really well, and not only did my daughter love them, the whole family thought they were great.