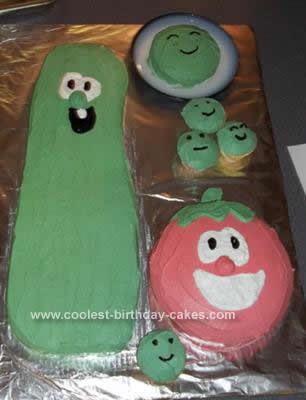 This Bob & Larry Birthday Cake is the cake that I made for my daughter’s 1st Birthday Party. I got most of the ideas for this website.

Larry- He is made out of (2) 9×13 cakes placed together longways and shaped. I used a Wilton icing recipe and Wilton Kelly Green icing to make him green. I first did a light coat to seal in the crumbs and then did the official coat. I used white canned icing for the whites of his eyes and the tooth. I used black gel icing for his mouth and pupils.

Larry- He is made from (2) 9-in cake pans stacked on each other. Iced him as well with Wilton recipe icing No Taste Red and Red Red. I honestly did not get the color as red as I would like and my cousin thought he was a Strawberry. I did the same for his eyes as Larry’s. For his “greens” I used left over icing from Larry.

Peas- Cupcakes. Leftover icing from Larry and their faces were drawn on with the black gel.

What do you think?