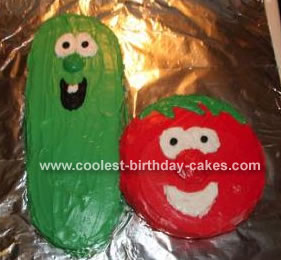 I had seen other pictures of Veggie Tales cakes and decided to attempt my own Bob and Larry cake for my 3-year-old son’s birthday party.

I wanted to focus on getting the decorating right, so I used cake mixes to cut down on time. I used a large sheet cake pan for Larry and a round pan for Bob. After baking the cakes, I let them cool totally then did the “sculpting”.

I drew Larry’s shape on a piece of wax/parchment paper and laid it on top of the sheet cake and cut around it. Place Larry and Bob touching on a large surface. I covered a piece of plywood with foil. After the shapes were right, I did a light coat of icing to “catch” all the crumbs that collect after cutting so they won’t show up in the final layer.

When coloring the icing, make sure to have plenty of food coloring on hand. The dark shades of green and red will take a lot of coloring. You will need white for the eyes and smile, so you could put some un-colored icing aside and dispense with plastic bags or use the kind that comes in a tube with decorator tips. Cover the cakes well with their assigned colors. You will want to have a little left over of the red and green to darken the shades a little more for the noses.

I recommend practicing drawing the faces on paper and with icing before attempting it on the cake. I looked at the covers of plenty of books and DVDs before/while drawing. When confident with the placing, use white and draw on the eyes, then use black for the pupils. Use the darkened red and green in plastic bags to “pile” on the icing for the noses. Move the icing in a circular motion to spread it out enough. Larry’s mouth uses black icing and a small square of white for his tooth. There are two options for Bob’s mouth. The open-mouth smile is what I chose, but I have also seen a simple black line as a smile. I considered a black line on his teeth, but it took away from it, so I managed to get it off without messing it up.