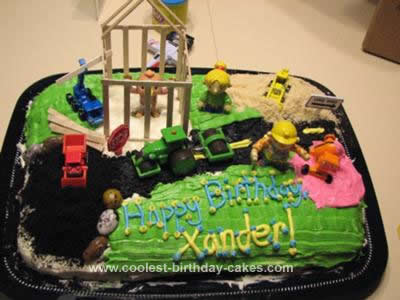 My son is a big fan of Bob the Builder, so for his third birthday, I decided to make him a Bob the Builder cake design. I knew I wanted it to be a construction scene with all the characters, for which I borrowed my son’s die-cast miniatures. I started with a regular 9″ x 13″ yellow cake that I made from a mix. I iced the entire cake in white icing first, so that there would be something for the “dirt” and “sand” to stick to.

I started by creating the road in the middle. I crushed up some Oreos (after removing the white centers first) and added in some melted butter to get a putty consistency. I then carefully patted on the Oreo mixture onto the center of the cake to make the road. I let it dry for awhile before starting on the other parts.

I used Popsicle sticks to make the building frame, which I had put together a few weeks beforehand to save time. I purposefully left a few of the roof boards off, so that I could have Lofty appear to be working on that. On the other end of the cake, I dabbed on some bright pink icing for Dizzy’s cement and even put some of the pink icing coming down from Dizzy so it would look more realistic.

I crushed up some vanilla wafers to make sand and put Scoop in the middle of that. I covered over most of the remaining white icing with some bright green icing using a basket weave tip, so it would look more like grass. I added some candy rocks and some plastic street signs to finish it off. I then added Bob, Wendy, and Spud to the scene.

My son thought it was really cool and so did the guests at his birthday party. Everyone wanted to a rock to eat!