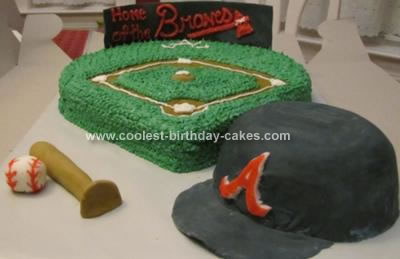 My friend’s son is a big Atlanta Braves fan, so he wanted a Turner Field cake for his birthday. His mom told him I’m not “Cake Boss”, but maybe we could do something related to the Braves.

So I started with the basic baseball field idea – a 9-inch square paired with a 12-inch round cake. When they had both cooled, I cut the square in 1/2 along the diagonal, and trimmed to round so the 2 cakes would fit together. I flat-iced the top of the cake with brown icing for the infield, then piped the rest with green icing – using a #22 star tip. Looking at an aerial photo of Turner Field, I drew the outlines for the infield in the icing with a toothpick, just to give myself a template for the piping.

When that was done, I used a # 3 round tip to pipe the infield lines and bases. Because I was afraid the cake would not be big enough, and because I had extra batter, I decided to make a baseball cap to go along with the field. I baked it in a small Pyrex bowl, put a thin layer of frosting on it, then covered it with fondant. I also made the brim of the cap from fondant, and rolled some extra underneath to make it stand up a little.

With the left-over fondant, I made a baseball and bat to put on the other side of the field. I also used a small amount of the brown fondant to make the pitcher’s mound. Finally, I made the Braves sign in the outfield from a mixture of fondant and gum paste. It was already tinted from the hat, so I just had to roll it out and cut straight edges.

Once it dried a little, I piped the lettering in white frosting and covered it with red sprinkles – to make it look a little like neon lights.