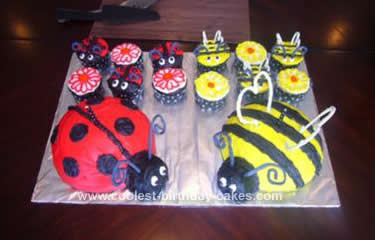 I made two different types of Bug Cakes. The ladybugs are all chocolate. The bees are all confetti. I made 12 cupcakes from each type of cake batter. The remainder of each batter was then baked in two separate glass bowls. Baking in a glass bowl takes A LOT longer than expected. I lowered my temperature by 50 degrees, and raised my time by 30 minutes, checked, and cooked about another 10-15 minutes. Be sure to buy “no-taste” paste food coloring from a craft store, or well equipped party decorating section of a supercenter.

For the cupcakes I frosted ladybugs, with red tinted vanilla icing, solid red and then piped on the head, of black tinted chocolate icing, about a quarter sliver of the cake, as well as piping on the dots. I frosted bees, with yellow tinted vanilla icing, solid yellow and then piped on the stripes, of black tinted chocolate icing. The wings for the bees were made by piping melted candy melts onto waxed paper into the shape of a heart, with two prongs coming off of the bottom, and allowing them to harden in the fridge. Just insert the prongs into the cakes at an angle to acheive the look here.

The antennae for both bugs were also made by piping melted candy melts onto waxed paper. The heads for either large bug were made of a cupcake frosted entirely black and then trimmed at an angle to meet the larger body cake snugly. Eyes for the bugs were simply piped on white icing with piped black dots in the middle of them. I alternated piped-on flowers and bugs for the cupcakes for a bit of variety.