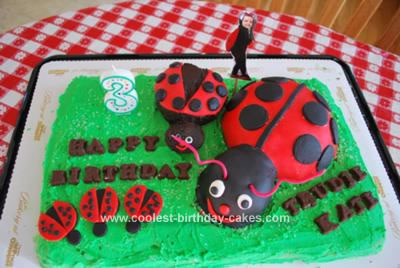 My little lady was turning three. She had a really adorable lady bug Halloween costume, which inspired me to make her a Lady Bug Picnic Cake. First, I prepared a chocolate cake mix and divided it into 3 medium-size mixing bowls, three smaller glass cupcake sized containers and 6 very small mini cupcakes. I baked these until cooked through (the smaller ones cooked very quickly; the larger ones took longer). After baking and cooling, I froze the cakes to use later to assemble the lady bugs.

The day before the party, I baked a yellow cake mix in a lasagna pan that was slightly larger than 9X13 and frosted it with green butter cream and green sprinkles. I had purchased a cake board and cake cover from the bakery at my local grocery store. If I had thought about it, I would have covered the board so the grocery store name did not appear under my base cake, but as they say, hindsight is wonderful.

After frosting and placing both cakes on the base cake, I covered the first bug completely with fondant. This was my first attempt at making and using my own marshmallow fondant and it was easier than I anticipated. I colored the fondant using the Wilton gel coloring and got a nice true red and black. The second bug was smaller, slightly flat on top and already dark from the chocolate frosting so I did not cover completely with fondant but instead just placed the wings and face onto the chocolate frosting. The larger ladybug needed antennae so I used curly candles and they worked perfectly. I used melted chocolate to make letters with some molds I got at a local craft store.

After the large ladybugs and letters were on the cake, I made three “little ladies” out of fondant. One tip for attaching the spots: The first spot I attached to the body using frosting and it showed and looked bad, after that I just wet the fondant and it worked well and looked much better.

As a final little touch I added a photo of my daughter in her ladybug costume. I cut her out and put her on a stick in the cake. I served picnic food (hot dogs, burgers, potato salad, fruit) at the party and pulled out my checkered table cloth, red plates and plastic wear in my picnic serving basket. Everyone loved the picnic in winter idea. I also put out a few other lady bug photos in frames on the table next to the cake in my dining room.