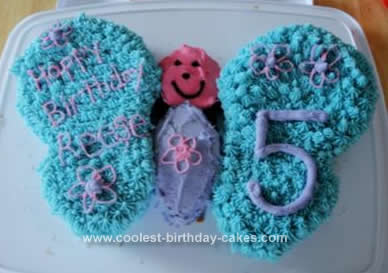 My daughter wanted a Butterfly Birthday Cake Idea for her 5th birthday. I searched this site for some inspiration and used pieces of a couple of different cakes to make it. First, I was determined that I wanted to make a cake that would fit into my 13×9 cake container. Searching online, I found an image of a butterfly that I wanted (I did not trust myself to cut two symmetrical wings freehand). Once I copied the image to a word document, I enlarged the butterfly’s wing so that it took up most of a piece of paper.

Once I printed that off, I cut it out and used it as a template for cutting the cake. For the cake, I used my favorite pound cake recipe to make a 13×9 pan. After baking the cake, I flipped it out of the pan and let it cool completely. Once cooled, I flipped it back onto a cutting board and pinned my wing template down with toothpicks. I cut one wing right side up and flipped the template (upside down) for the second wing. I aligned the edges of the template as close to the edge of the cake as possible to allow for the biggest pieces of extra cake as possible. Using the extra cake, I cut out a round circle (using a drinking glass as a guide) and pieced together chunks for the body of the butterfly.

My daughter requested a pink head, purple body and blue wings. I made butter cream frosting, tinted it with Wilton food coloring for the correct hue. I frosted the pink body first (top then sides), then the purple body (top and sides) and pushed them together. Next, I frosted the wings. I wanted to add dimension, so I used a Wilton star tip (the large size). I piped two rows around the perimeter of the top of each wing, then piped the edges before finishing the top. The sides of the wing that were next to the body and head were the most difficult to get and were completely frosted. I added the large “5” with the purple from the body and the large Wilton circle tip. I also used this tip to make the center of the flowers. I wrote my daughter’s name and happy birthday with the smallest Wilton circle tip and the pink frosting from the head. I also drew the petals of the flowers with the pink. Finally, I piped in eyes, a nose and a smile for the butterfly’s face.

It took me approximately 1.5 hours to cut and frost the cake. I think making the frosting in advance saved time, although the cold frosting was much harder to pipe in (I even took it out of the fridge about 2 hours before I started frosting in order to let it warm up some). I did not level the cake much and if I were to do it again I would level it better. I think the pound cake was the correct density of cake as it did not break at all when I was cutting and moving the cake.