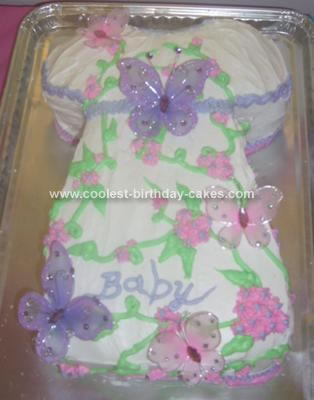 This was only my 2nd cake to ever make and decorate with icing and piping. It was fairly simple. I used super moist cake, as I like it best and fluffy icing from the little containers. I made this homemade butterfly dress cake for my sister’s baby shower. Obviously it was a little girl she was expecting.

To make the dress I baked two 9×13 inch cakes and layered them one on top of the other. I chose not to put anything in between the layers. I then carved the dress design out of the cake (don’t worry if this gets messy, it did for me as well).

I put a crumb coat of icing on the cake, sat it in the fridge and let it harden the icing so when I did the next layer there was little chance of the crumbs coming through.

I mixed some coloring with small (approximately 1/4 cup) amounts of icing and made the green, pink and purple icing I needed to ice the cake.

I will admit, being new to cake decorating, I don’t know all the terms for the different piping ends. I should have used the small (roughly 1/8th inch hole) to make the vines but I got carried away and filled that bag with the purple icing. So I instead used the tip meant to make the leaves, for the vines as well. I just turned the end sideways and stretched the icing out. After making the vines, I added clusters of flowers using the star tip (in pink).

Then I went back through with the purple dot and added centers for the flowers and lace to the arms and cross-section of the front of the dress. I went back and added leaves in areas which needed a bit more filler. The last thing I did with the icing was to add a double band around the bottom of the cake. I first just made a straight band of pink around the bottom then added dots of purple on top of the pink band.

The very last thing I did was to add the butterflies in strategic places to finish off the look.