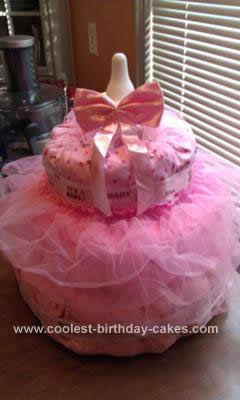 I used the can of cereal as the base and I did three rows of diapers around the can. Once finished, I set the bottom tier in the center of the receiving blanket and tucked it around the can and secured it with a rubber band.

Starting with the bottom tier, I wrapped the white ribbon around the rubber band and secured it with clear tape and repeated with the other two tiers. I also used tape to secure the ribbon in place. Once completed, I repeated the process with the decorative ribbon.

Once finished, I placed the tutu over the top tier and fluffed it out. There is a bow on the tutu, I removed it from the tutu and taped it to the bottle and used the decorative hair band around the collar of the bottle.