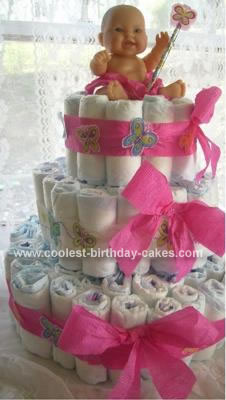 I found the diaper cake idea online and really enjoyed it. I was planning a baby shower for my sister who is in love with anything butterfly. My homemade butterfly princess baby shower diaper cake is constructed of little more than 2 pks of 50 count size one diapers, a roll of paper towels, rubberbands, paper streamers (2 kinds, 1 pink the other white with butterflies which was modified by cutting and taping b/c it said Happy Birthday), a baby doll and a pencil with a butterfly eraser.

I started the first band on each layer the same way, by placing a large rubberband around the roll of paper towels, then stuffing diapers under the rubberband (making sure all rubberbands on each diaper and the one holding them to the towels were lined up in a row in the middle of each layer). When adding the second and third bands of diapers, I would wiggle a rubberband around four-five of the diapers on the previous band and then stuff a band for then next layer…and continue on around the cake until that layer was complete and then start the next layer if one was needed.

I used paper streamers to make my ribbons and bows. I first put a band of streamers around the layers (I cut the Happy Birthday out of the butterfly paper and taped the butterfly sections together). I then made my pink bows and and pinned them to the cake in a stair step manner, using straight pins.

I covered the top center (the paper towels) with pink streamer paper and sat the baby on top with a butterfly pencil/eraser to look like a wand or something. Everybody really loved this homemade butterfly princess baby shower diaper cake and I received wonderful reviews on it.