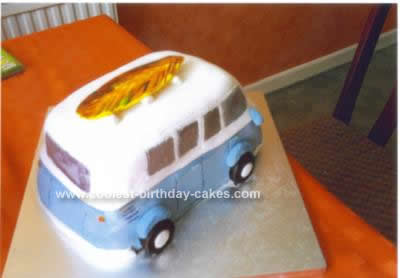 I am self taught at cake making and over the years have made numerous cakes for family and friends. I was asked by a friend if there was any way I could make a cake like a VW camper van for a friend’s son’s 18th birthday. Not ever having attempted to make a cake in the shape of a particular object before I decided to take up the challenge forthwith.

Using the same recipe for chocolate sponge that I have used over the years I started by making a 14inch square sponge. Once cooled I divided the sponge into three identical sizes, I then joined the three pieces together using chocolate buttercream.

Then looking at a photo of a camper van I took a knife and carved the sponge into the required shape of the body. I then applied the blue coloured regal ice to the lower half, then using white regal ice applied over the top half and trimmed to shape with a sharp knife. While the regal ice was still soft I marked out the shape of the windows with the back of a knife. The windows were then coloured in using silver food colour.