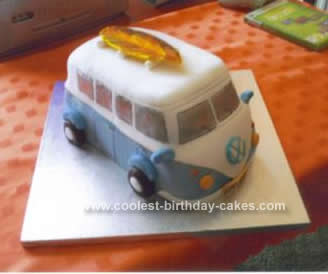 First and foremost the cake it self is a traditional chocolate sponge. Firstly I made three oblong shaped sponges, once cooled each cake was place don top of each other with a filling of chocolate butter cream.

Using a photograph as visual aid I then shaped the bodywork of the van, made three four wheels using sponge. Once happy with the shape I brushed the outside of the sponge with strained raspberry jam, rolled out blue coloured regal icing to cover the cake, trimming to size, also covering the wheels.

For the white trimming out icing to shape for the bonnet and bumpers, at the same time making the blue mud guards. The detail for the doors/windows were done using the back of a knife to indent the impression in the icing, the wheels were painted, windows painted with silver food colour, wipers and other details were drawn on using a black edible food pen, the wheels were applied to the main body along with the bumpers, number plates and the mud guards.

I made a surf board from regal icing and once fully dried painted it allowed to dry and applied to the top of the camper van. ” HAPPY 18th BIRTHDAY “ 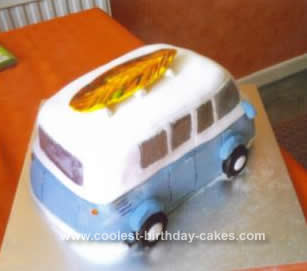