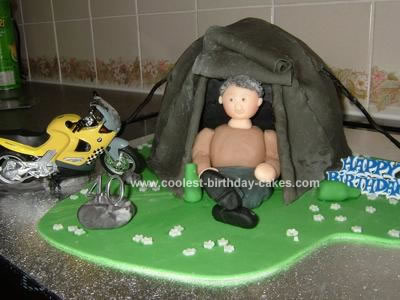 I was requested by my childhood friend, to make a birthday cake for her hubby’s 40th. No theme was given, but the invite to the party was a picture of the man himself on his motor biking tour of Europe taken earlier in the year, sat in front of his tent, alongside his BMW bike. It just had to be a Camping Cake.

I always tend to spend days before planning in my mind how to go about making the cake, um’ing and ah’ing as to what will work or not. The cake itself is a rich fruit cake, two 20cm round cakes, one on top of the other. It was then shaped into a tent-like shape (using the Argos cataloge for reference as to what one looks like!). I then covered it in good chocolate to give a smooth surface to work on (we dislike marzipan). When set I could begin.

Strawberry Laces (or liquorice strands) were used along the edges under the icing to give the impression of tent poles. The inner entrance was put on first, followed by the main tent. The outer entrance was made separately using Gum Arabic powder to stiffen the icing, with a wooden kebab stick rolled into one edge of each triangle. The door is just a rectangle loosely rolled on top. Gum Arabic was great for gluing them in place. The guy ropes were liquorice with tiny triangles over the tent end.

The model of the birthday boy was the first model I’ve made. He’s held together with cocktail sticks, his hair made using a sieve! Still, I was quite pleased as he did give a passing resemblance to the actual model!

Green icing grass, white pressed daisies, a couple of green beer bottles and a model of the BMW bike were the finishing touches. I always leave things to the last minute, this means working late into the evening: the last tip therefore is, a glass of wine. Why not!