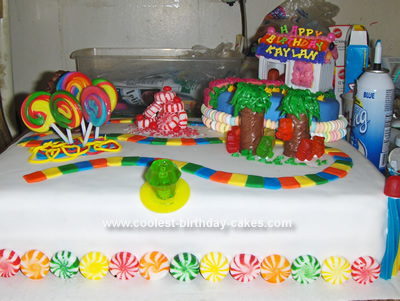 A friend of mine decided to test my cake skills, and requested a Candy Land Birthday Cake. She had so many suggestions but I told her “I got it”. Her suggestions had nothing to do with the actual game board. I bought bags and bags of candy not knowing exactly what I was going to do with it all. First I made 3 batters because the pan was deep and huge. It was 11x15x3. I crumb coated the cake with buttercream and laid Wilton’s fondant over it. I used fondant as the game pieces. Some colors I had already, others I had to dye (after the fact a friend suggested laffy taffy) I have several sections of candy “lands”. First stop was the Gummy Jungle. I used mini Twix bars and put green icing on top to make trees and placed gummy bears around the trees. We then go to LollyWorld, where I inserted colorful lollipops and used different color icing around the base of the lollipops. Next is Chocolate Craters, a mountain of Reeses peanut butter cups with chocolate icing dripping off of it. We then go to Peppermint Pile, regular red and white peppermints with red cinnamon candies along with peppermint sprinkles, this then leads to the birthday girls personal cake with which I used Bazooka gum as the pathways. The house was decorated with icing and jelly beans and NON EDIBLE letters. Inside the house was juju beans! The base of the b-day girls cake was a candy necklace. The base of the larger cake was in the front and back, colorful peppermints and on the side I braided the tropical Twizzlers. The corners of the cake had the Twizzlers and juju beans on top of it. I added also ring pops just as an extra piece of candy. In this picture you can’t see but I also make a fondant ginger bread girl with two pony tails. The filling was a buttercream walnut filling. 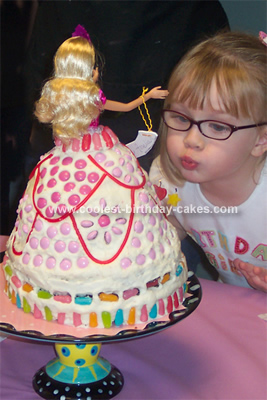