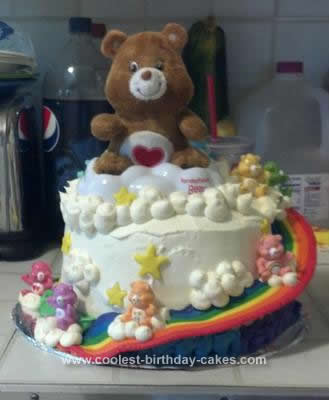 My 4 year old daughter loves the Carebears. We have to watch them at least 3 times a day. I had never made a birthday cake like this so I thought I would give it a shot this year and came up with my own design of a Carebear cloud birthday cake after looking at some ideas on the net.

I took 2 boxes of plain white cake mix and split it into 6 bowls. I used gel dye to make the cake into the colors of the rainbow since it is less likely to make the mix bitter. After stirring the dye in I poured it into 6 9 inch round cake pans and baked them until a toothpick came out clean. While they baked it was time to make the frosting.

I used another recipe I saw on line for pudding icing. It is a mix of cool whip, instant pudding, milk, and vanilla. It turned out really well and tasted wonderful! I made up a couple of batches of that and split that up for the layers and the cupcakes I did as well.

After the cakes cooled off it was time to assemble it. Each layer got some colored icing between the layers to hold it together. After it was assembled, I suggest putting it in the fridge for about half an hour before trimming the edges a little so the cake doesn’t rip or crumble as bad. After I trimmed a little off the edges I put on the crumb layer of icing in white. Back in the fridge it goes, this icing needs to be refrigerated so every step should be in the fridge while you do something else.

Time to make the rainbow slide! I used gum paste, premade from Wilton, you can buy in the store. I did the same with that to dye it. Split what I thought I might need for each color and used the gel dye. This you have to work and knead like bread to dye it colors. I put on latex gloves to keep my fingers from getting dyed too. Then I rolled the colors into long thin strands. I used a little water on a q-tip to stick them together to make the rainbow and used a rolling pin then to flatten it into the slide. I let it settle for about 10 minutes before I assembled it onto the cake. Toothpicks were used under the slide along the side as well as some clouds of icing to support it around the sides.

I them used a big round tip to make the rest of the clouds on the cake and where the bears are sitting. The stars are also gum paste just molded into shape and stuck in the icing. The Carebears are just mini plastic bears I found online and the Tenderheart Topper was also found online. My daughter loved the cake and was so excited to see the rainbow inside and out when we cut into it! 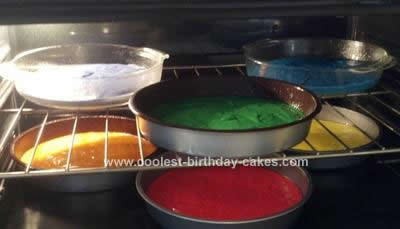 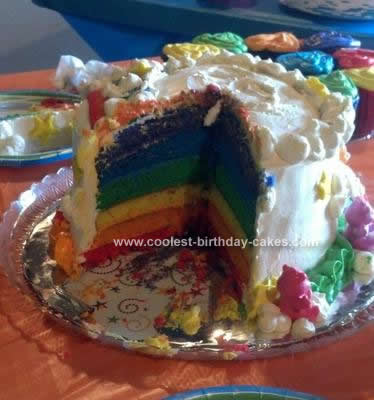 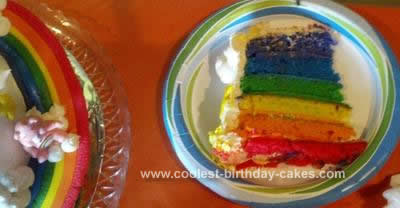