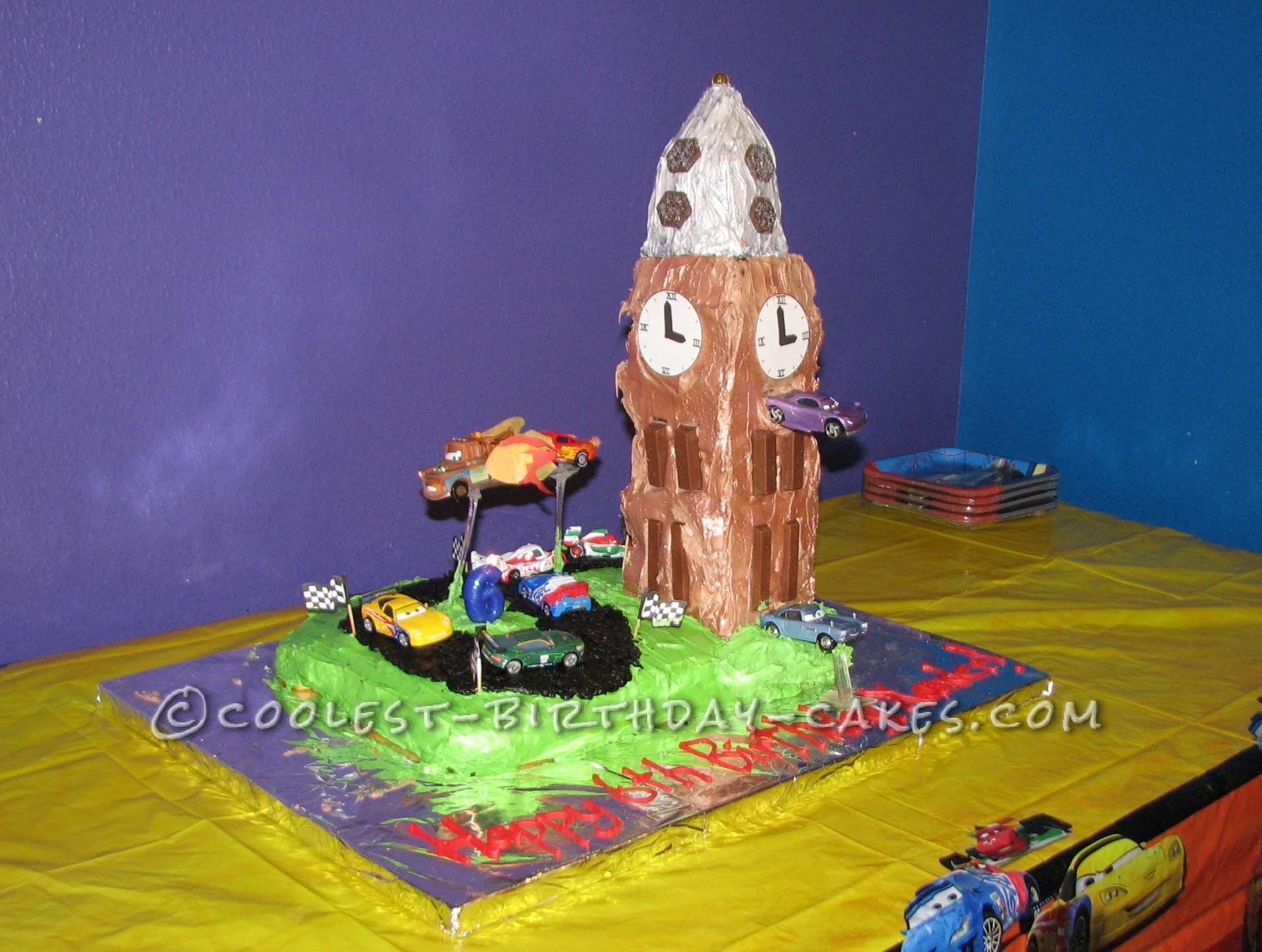 For his 6th birthday, my son requested a Cars 2 cake.  We decided to go with the scene where Lightning and Mater are hooked together and flying over London and Mater has a bomb under his hood.  Meanwhile, Holly and Finn are escaping from Big Bentley.

The base was just a simple half-sheet yellow cake with green frosting (made from vanilla icing & green food coloring).  I formed the number “6” race track on top of the cake out of crushed up Oreo’s and melted butter and put several of the other race cars on the track along with checkered race flag toothpicks that I had picked up at a party store.  I cut a square hole in one corner of the base cake to insert the clock tower.

The Big Bentley clock tower was, of course, the complicated part.  After doing a practice cake a couple of weeks before, I knew that stability was going to be a key factor.  So to help keep the clock tower from leaning or crumbling, I took several steps.  First, I cut the cake into several same-sized squares (I have a cake pan with a grid on the bottom, so that made this part very easy.)   I stacked the cake squares on top of each other, making sure that the most level and sturdiest pieces were on the bottom.  In between each square, I put a hard plastic square to give it added stability (I just bought some of those cheap acrylic picture frames from Michael’s.)

I used 8 metal kabob skewers that ran up through the cake and the acrylic squares (that had holes drilled to accommodate the skewers).   I put one in each corner of the squares and then four more spread out through the middle. That gave the entire clock tower the stability it needed. I was not concerned about it leaning and falling anymore. I then mixed chocolate icing with a little bit of vanilla icing to get a tan base color and frosted all sides of the clock tower.  Afterwards, I carefully blew copper sugar dust that I got on the baking aisle at Michael’s all over the tan icing to give it a shimmer.

I pushed 2 regular-sized and 2 mini Kit Kat bars into the icing on all four sides to give it some decoration. I made the clock faces out of white and black sugar sheets and used an edible ink pen to write in the numbers.  Since I needed to transport the cake to an off-site party location, I wanted to be able to hold onto the tops of the metal skewers during the car ride to make sure the tower didn’t topple over.  Because of that, I chose to make the “roof” of the clock tower not be made out of cake.  It was constructed from pieces of Tupperware and other stuff I found around the kitchen to give it the right peaked shape.

I then covered the whole thing in foil and iced it with white icing that I sprayed with silver icing spray afterwards.  I added some 100-calorie Oreo cookies to look like dormer windows and to give it a little more decoration.  On the very top, I inserted a fancy toothpick that had a gold ball on it that I found at the party store.  That made it really easy to take the iced roof on and off before and after transport.

I used clear, plastic mini-forks to support Mater & Lightning who were supposed to look like they were flying through the air. I added red and yellow tissue paper flames to Mater for his rockets.  I used a clear, plastic knife with tape to rest Holly on and stuck the other end of it into the clock tower to give her the appearance of flying out of the clock tower.

My son loved his cake, and the other people at his party thought it was pretty awesome, too.  I learned a lot about how to build something vertical from this experience to take with me to my next cake-making adventure. 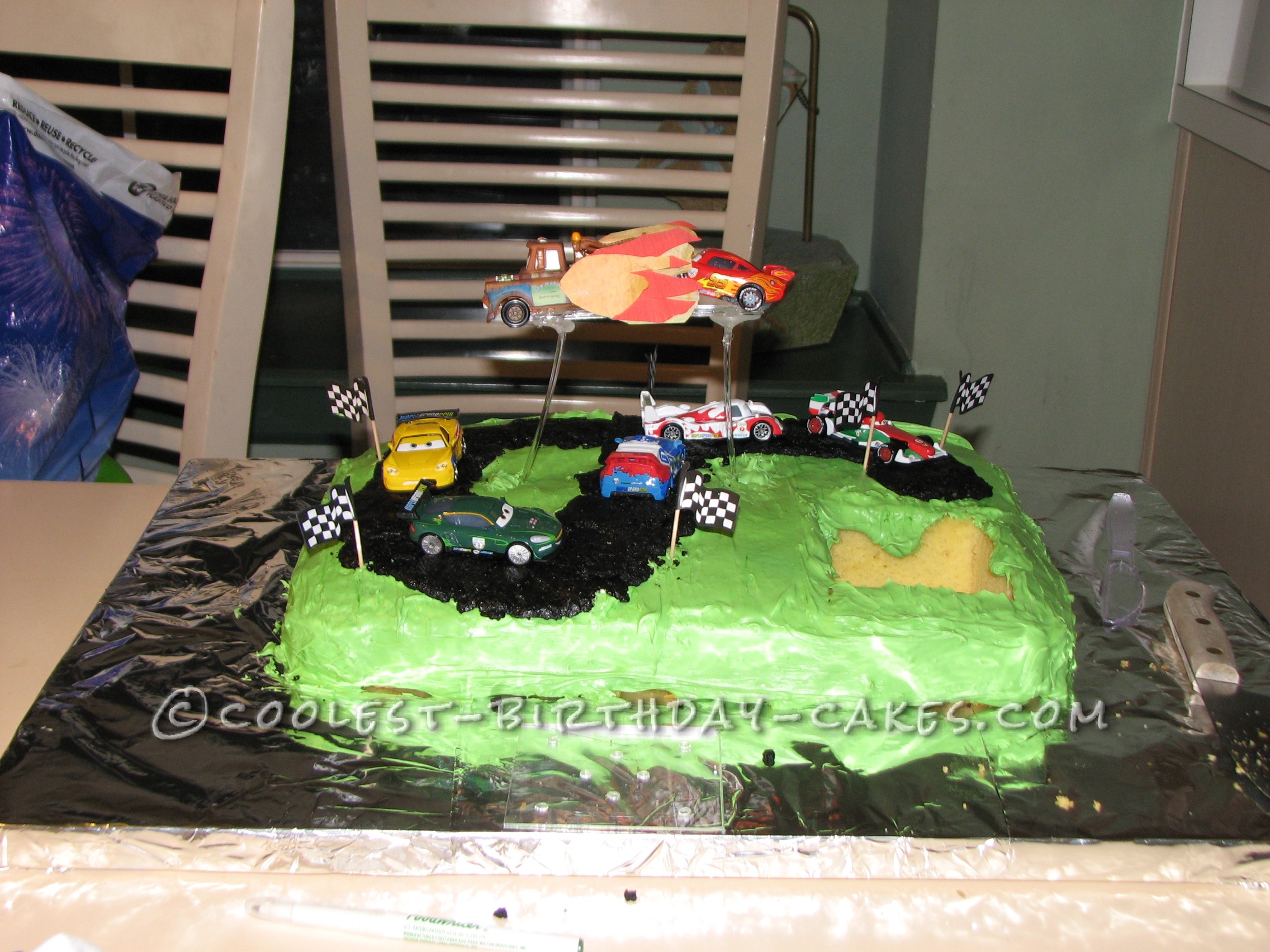