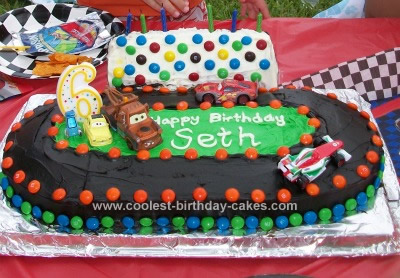 My son’s 6th birthday was a Cars 2 theme. This time he wanted the whole track. So after looking a various ideas for a Cars 2 Racetrack Cake online, especially on this site, we decided on a oval track with stands for the spectators to view the race and a pit crew spot in the middle.

The cake is from two “Funetti” (white cake with sprinkles) box cake mixes. I used a 9×13 pan for the first mix and a 9 inch round pan for the second mix (with left over batter I made some cupcakes – not shown) I cut part of the 9×13 cake so that the whole cake would fit in my cake box and the part cut off became the stands (after angling the top) which I secured with toothpicks. I cut the round 9 inch pan in half and used it on either end for the round track edges. I used one white can of frosting (divided half in white and half for the green) and one chocolate can of frosting with black dye added. My son loves M&M’s so we used them to decorate around the edges and for the fans in the stands. He picked out which of his cars he wanted to decorate with and we washed them and placed them on the cake.

**Hint: One of the cars was white and to keep frosting off the bottom I used a little rectangle of parchment paper. I wish I would have done that for all of them. The green frosting was hard to wash off the little grooves under the cars.