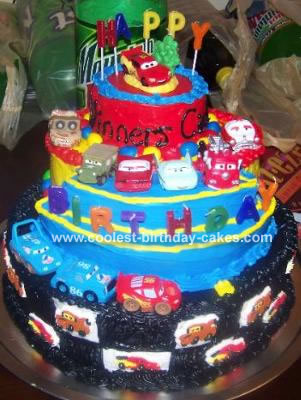 With the designing help of my husband and mom we came up with a really cool concept for my daughters third birthday Cars cake. I used, I think it was, a 12 inch round and a 10 inch round, if you can find bigger pans it would be better, because I wanted the cars that were racing around the cake to actually be on a track. They ended up almost hanging off, because my bottom cake wasn’t as big as i thought it would be.

I actually made two of the 10ich rounds, one was for the bleachers. I used store bought cake mix and icing, the colors I used I actually bought from a craft store, they run about five dollars, but you don’t have to worry about mixing them right.

Pretty much all I did was bake the cake, I frosted the bottom white, on the sides and black on the top, then I sat the small round on top, it was a little too big, so i scooted it back and trimmed so i could have room for the bleachers. I frosted the top red, then I cut out the bleachers, using a stair stepping cut, so they would be one piece. I stuck those on the cake, cut it so it would fit with the small round, then frosted them blue, with a writing tip. I bordered them in yellow.

On the top with just a standard writing tip( you can get a three pack with a border tip in it for two dollars at Wally World). I wrote winners circle in black, then with a regular border tip I did the borders. I used peanut M&M’s for the round border. For the flag I used the writing tip to draw the flag around the bottom, then just stuck on the candy designs. I had to use frosting to hold them on.