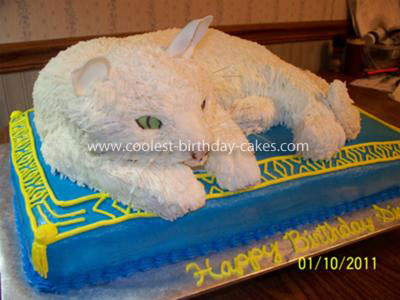 My mom and I made this cat birthday cake for a lady who owns a pampered white kitty cat. We baked 2 9×13 cakes and stacked them together with icing inbetween. Then we started at the back of the cake and rounded the cat’s back and progressed up toward the cat’s head. The head was a separately baked small cake carved to resemble a cat’s head. We sat the head on the cat’s front paws which were shaped from left over cake that we cut off the body. The legs and tail were also formed from leftover cake.

We set the cat on top of another 12×18 cake decorated to resemble an aztec print blanket which is what the real cat actually sleeps on. I used tip 233 (the grass tip) but pulled the hairs out long and smooth. The ears were made from gumpaste several days in advance so they had time to dry. The eyes were also made from gumpaste and a toothpick was stuck into the back of each. When we put the eyes on the cake, we cut out an indention and simply stuck them on and then added some buttercream piped details to make them look real.

A few pieces of fishing line (the only thing not edible on the cake!) for the whiskers and eyebrows topped the cake off!