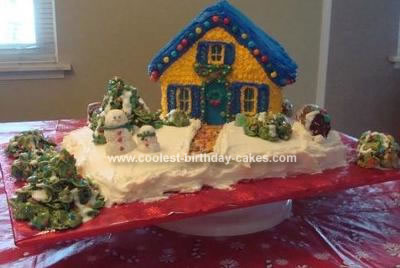 I made this Christmas house cake using 2 cakes. I baked a 9×13 cake and the Wilton Stand-Up House pan. I trimmed out a rectangle to position the cake into. I went about 1.5″ into rectangular cake. I recommend making all accessories (such as the items listed below) prior to assembling based and house portion of cake.

I used buttercream icing and melted candy. For walkway I used Fruity Pebbles instead of Rice Krispies Treat recipe and trimmed to desired length an width. I positioned the walkway and trimmed out about a half of inch from the base cake. Secure in cake with some icing.

To make the trees and bushes I used the cornflake wreath recipe and molded them into appropriate shapes. Using various colors melted candy I decorated the trees to resemble lights and snow.

For snowman I formed them using a rolled cookie recipe and just baked them together. I dusted them with vegetable oil and rolled them in powdered sugar.

Let cool and secure to house cake with small amount of icing. (I traced a medium line around the back of the molded candy an a X across the middle an that always seems to be enough). Using small star time I piped garland around windows and door. Using melted candy I added lights to garland. I used Mike&Ikes for the lights on the roof.