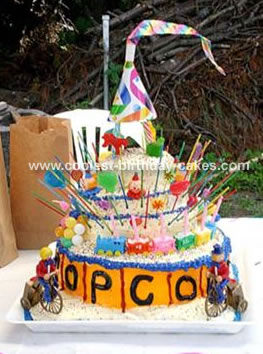 This is a circus cake that I had made for my best friend’s children. They had a combined birthday party that was set up with all of the games from a carnival. I actually thought of the idea. After looking online at all of the things that I would be able to use, I brain stormed and drew it on paper.

I used 3 different types of cake, the main one being “red velvet” because I loved the punch of color. Made sure to let them fully cool before decorating. It was quite simple being that they were standard cake rounds. I used butter cream frosting. Frosted the bottom layer yellow with red stripes to look like a popcorn bucket. The next layer had those sparkler candles all over the place, along with the plastic clown heads, and some other fun candles that I had found to give it a wild factor!

When I think about the circus everything is happening at once and it’s loud and crazy so that’s what I wanted to express through the cake. And the top layer is a carousel. I cut down a party hat and attached it to some of those hard candy sticks. The flag that comes out of the top is one of those noise makers, I just flattened it out and wrote Happy Birthday on it.

The animals were gummies that I had found. Then just sprinkle those round dot sprinkles everywhere! My friend was excited that it looked very much like the original picture that I had drawn. Oh and I would suggest food coloring that is made for tinting cake icing because with such bold colors you would end up with color soup if you just used regular food coloring. Have fun!