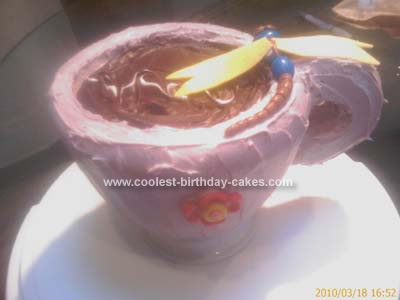 My sister asked me to make this cake for a friend of hers that loves coffee. I ended up using my Pampered Chef batter bowl which just happened to be the exact shape I was looking for. I combined all the ingredients of 1 box of pound cake, poured it in the batter bowl and baked it at 325 for about 1 hour and 15 minutes.

I let the cake cool overnight in the refrigerator to make frosting easier. Next day I placed it on a plate and frosted the cake. I used white whipped frosting (which spreads pretty nicely) and added food coloring to get the purple color. I thought for days on how I was going to make the handle and decided on a basic cake donut. It turned out to be the right shape. I cut about 1/4 off the edge and using toothpicks stuck it in the side of the cake, and then frosted that too.

This lady also happens to love dragonfly’s so I made the body by taking 3 pieces of almond M&M’s, and 1 smaller piece of almond M&M’s for the head. I took little bits of tootsie roll and rolled out two tiny balls for the eyes and attached them to the head by simply pressing them on. I made the tail out of rolled tootsie roll which I then notched with my fingernail. The legs (which you can’t see from this shot) were thinly rolled out pieces of tootsie roll. The wings are just cut out Juicy Fruit gum.

Coolest Ladybug Cake in the Garden