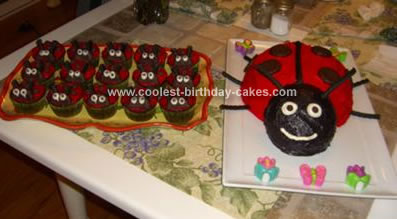 I made this ladybug cake for my daughter’s two year birthday. She is a fan of ladybugs and was a ladybug for Halloween so I knew she would love a ladybug cake. Both the cake and cup cakes were made of devils food cake mix.

I used apples sauce in place of the oil in the cake mix for extra moistness. I baked the ladybug cake in a round Pyrex dish, the head of the ladybug in a 6″ Pyrex dish and the cup cakes in cup cake cups.

Note: I did have problems making my white cream cheese frosting red with food coloring and had to purge the entire batch as it remained pink and never turned red. My suggestion would be to just buy the red frosting or use the red fondant.