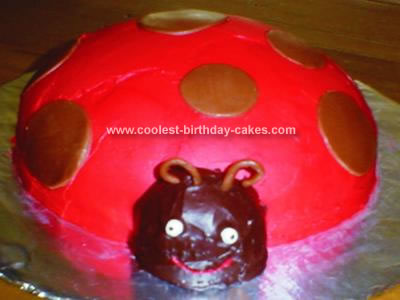 I started with a Dome Pan Carrot cake (shaped like half a ball with a removable cake inside) and one cupcake. With Cream Cheese frosting I frosted in between the layers. I took the same icing and added regular red food coloring. (It didn’t thin it out too much like some people warn).

I frosted the outside of the Lady Bug cake with the red frosting- I used a regular table knife to apply the frosting then took a spatula dipped in water to smooth it out. I warmed a large Tootsie Roll in the microwave a few seconds and flattened it out and cut it with a biscuit cutter to make the spots.

I trimmed the cupcake into a half-ball to make the head. I added a few drops of black food coloring to a little red frosting to make the brown. I took my Tootsie Roll scraps and rolled them in my fingers and formed them into the antenna’s. I used a white sugar coated licorice piece for the white eyes. I dotted the brown icing on the eyes and used some of my red icing to add a mouth with a toothpick.