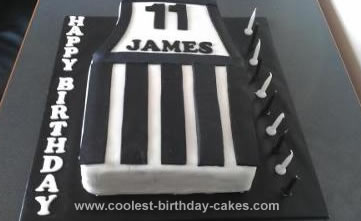 I made this Collingwood football jumper cake for my friend’s son who is a fan of the team. I used a rectangular tin to bake the chocolate cake. The strips were measured to be 3 cm in width. I used a ruler to ensure I had consistent measurements for each strip and used a pizza cutter to cut each strip.

I rolled out the white fondant initially and used black fondant for the decorations. The ready made tube black fondant is ideal. I also lined to board with black wrapping paper to give the cake a real lift visually. I printed the number 1’s and cut them out which were used as a template to make the numbers. I used a sharp small knife to cut around the numbers. This is a cheaper option than trying to fight the right size cutter.

With the name “James” i bought some play dough alphabet cutters (they are considerably cheaper). All the decorative black elements of the cake were stuck on the cake with Betty Crocker cream frosting. I used a paint brush for each element of the cake. I used black and white candles that I bought from cake supplier and also stuck them on the board with the cream frosting.

The stitching effect on the sleeves of the cake were made using a souvlaki stick by gently making inserts. This cake was a huge success. James’s face was priceless! The cake was the rave of the party. The concept of the cake can be adapted to any favorite team.