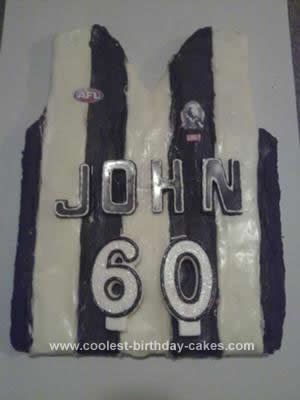 My better half’s father (and the whole family) are fanatic Collingwood fans – what’s more appropriate for his 60th than to make a Homemade Collingwood FC Football Cake? Stressed for time and inspiration, I decided to make a simple guernsey. I baked a double quantity of a chocolate fudge/mud cake. Froze it for a bit to make the cutting easier, then just cut out the ‘v’ for the neck and trimmed the arm holes.

Covered the whole thing in white fondant, (only because it is smoother and easy to handle). Then I made a simple ganache out of dark chocolate and used a spatula,(no palette knife?) to create the stripes down the guernsey. I cheated and cut out the emblems from magazines, covered them in contact and placed them on the cake, just held them in place with a drop of ganache. Made alphabet chocolate letters out of an alphabet chocolate mould and placed them on the cake, then outlined them with white chocolate writing icing – I’m not very good at piping. The candles were from a cheap shop, but all glittered in pink – so I just grabbed a black marker and covered the glitter, (everything must be black and white!!)

The candles were placed on the cake once the destination was met. Needless to say – Collingwood and Chocolate could’nt really go wrong with Johnny. He loved the cake and it was apparently polished off by the next day! 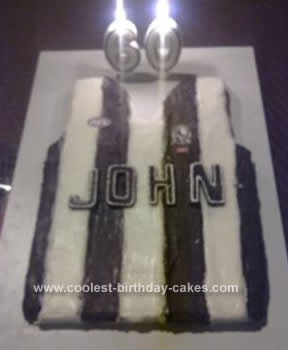 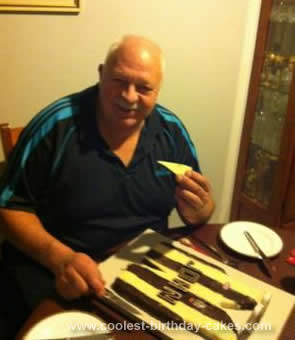