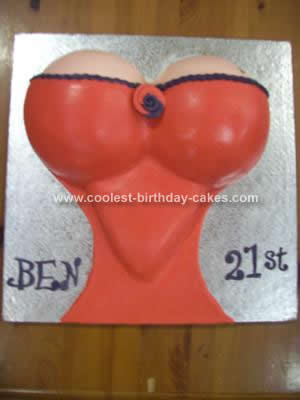 I made this Corset Birthday Cake Idea for a friend’s son’s 21st birthday. I had a Wilton Ball Cake, which I cooked as the boobies. The trimmings I made the bottom bit underneath. Buttercream was spread all over it.

I then covered it all by flesh coloured fondant, followed by the red fondant. Trimmed it off, and then popped the lacing around the top. The rose was easy by just rolling a strip of fondant icing and bending it back.

The reason it was shiny as I was told my by mum that by putting a bit of shortening in it gives a gloss.