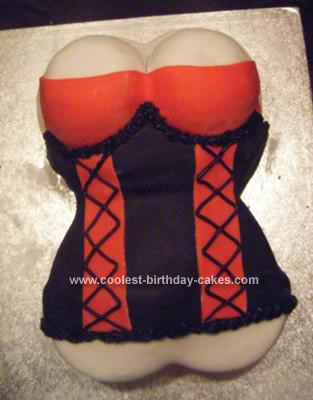 I made this Corset Cake for my boyfriend’s 22nd birthday and he sure seemed to appreciate the effort! I couldn’t really find any similar cakes to take inspiration from, so a lot of it was guess work, but it seemed to work out fine!

It is made out of four heart shaped sponge cakes, and two small round sponges, jam, filling, fondant icing and piping icing.

I then cut off the point on the bottom of all four of the hearts, as it isn’t needed. Make sure all of them are cut off evenly on all four hearts, they need to stay the same size. I then placed two of the hearts on the cake board, joining where the points would have been (and as you can see, it creates a nice ‘waist’). I put the filling in, and put the tops on. (It is also an idea, put jam between the joining of the hearts where the point was, to help keep them together.)

Once that was done, I turned my attention to the boobs aspect of the cake. These were made out of large rounded foil pudding basins, which had the flat bottoms poked out to make them more rounded. I less than half filled them with sponge mix (you don’t want them too big!)and cooked them.

Meanwhile I covered the first part of the cake with jam. When the boobs were done, I placed them on top of the cake, and covered them in jam as well, and there is the basic cake.

Now for the icing. I used fondant icing and piping icing for this cake. I used the white fondant icing, for the top of the boobs and top of the ‘legs’. The white icing doesn’t need to cover much of the cake, because not a lot of it shows. Next I moved on to the red icing, which covers the lower half of the boobs. I used just a strip of red, just big enough to overlap the white slightly, and the finish just below the boobs.

I then covered the rest of the exposed cake in black icing. This must be done very carefully because of the shape. Gently mould the black icing to the ‘waist’ and overlap it slightly with the white icing on the ‘legs’ and then gently press it down under the boobs, and with a knife, carefully slice the black icing so that it curves round the bottom of the boobs and does not cover them at all.

I then measured two strips of red icing to go from the top to the bottom of the black icing. I lightly brushed them with water, then placed them on the cake.

I then used piping icing to do the lacing on these red strips, and also to surround the top and the bottom of the black icing.