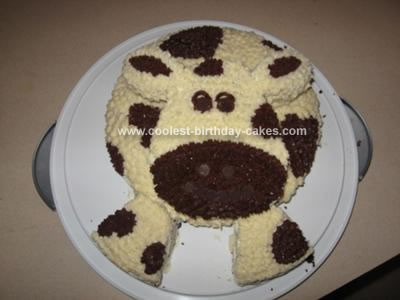 Cows are my daughter’s favorite animal, so I made her this Cow cake for her third birthday.

I made a chocolate cake using two 9″ round cake pans. One cake was used to form the body of the cow. The head, ears, and legs were cut from the second cake. The trick is, to make the cake look like a cow, to cut the head into a more elongated shape rather than leaving it round. I found that when the head was too round, the cake looked more like a pig.

The ears were cut in oval shapes and the legs were square shapes, just slightly narrower at the top than the bottom.

The frosting was butter cream, with chocolate frosting for the spots. I used a star tip to frost the cake. The eyes, nose, and mouth were chocolate chips, simply because I had them in the house, but any chocolate candy pieces would do.

Overall this cake was pretty easy to make; the hardest part was figuring out the right shape and proportion for the head.